Not only since the revelations of Edward Snowden has it been known that all data that we outsource to the cloud, both in our digital private lives and in our working environment, is under certain circumstances a highly insecure matter. This is why end-to-end encryption, or client-side encryption, is so important for data protection.

Even if you are of the opinion that your data is safely stored and only you have access to it, there is usually an institution that could have access to your data: Your cloud provider. With the latter, there's no need for absurd conspiracy theories. Secret services and investigating authorities can, for example, demand a court order from the cloud provider to hand over your files. Or if - as has already happened several times - the security mechanisms of a cloud provider are hacked, your data is freely accessible and unencrypted on the network. All these possibilities must be countered with modern encryption techniques.

However, file encryption only makes sense if it is continuously effective from the beginning to the end of a transmission path. Both the files themselves and the transfer into and out of the cloud must be encrypted.

All of the above requirements are met by encryption technologies based on end-to-end encryption. Multiple encryption instances with public keys and private keys and the corresponding certificates are used. The respective certificates document the authenticity and the legitimation of the authorized partners. Files that are to be outsourced to the cloud in order to share them with other authorized persons are encrypted directly at the user's location and sent to the cloud server via an additionally encrypted transmission path. From there the data can be accessed by authorized persons - of course, this transfer to the file recipient is also encrypted. The files are only decrypted again at the recipient's end. You see: At no point within the transmission path via the encrypted cloud are the file contents visible. The only thing that the central instance of such a technology "sees" on an administrative level are the respective access permissions (individuals and groups of people), the actual contents cannot be decrypted there either.

This method is called end-to-end encryption, including client-side encryption. For this to work, everyone who wants to participate in the data exchange must generate an asymmetric key pair and make the public key available on the exchange platform. 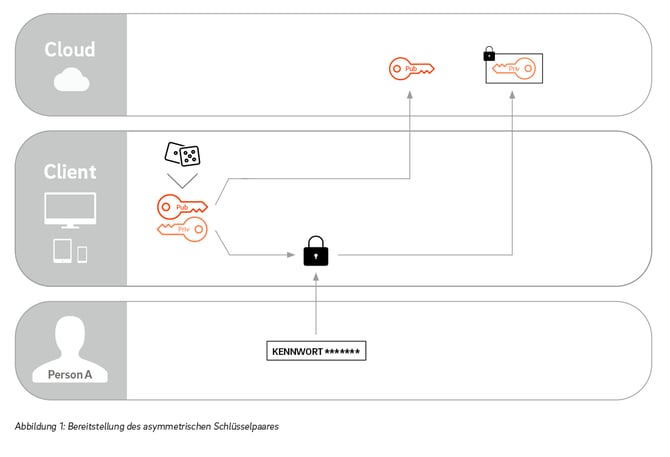 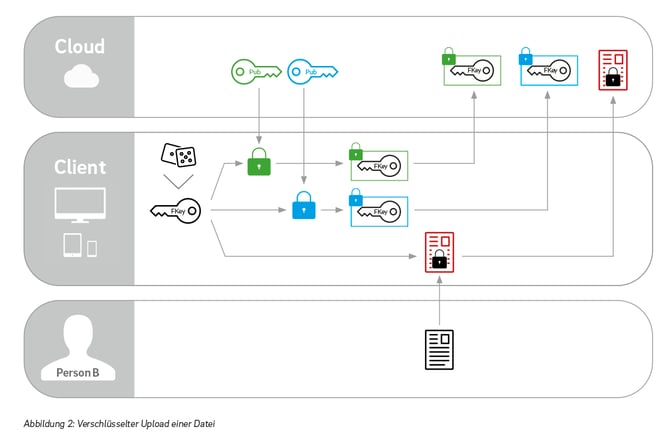 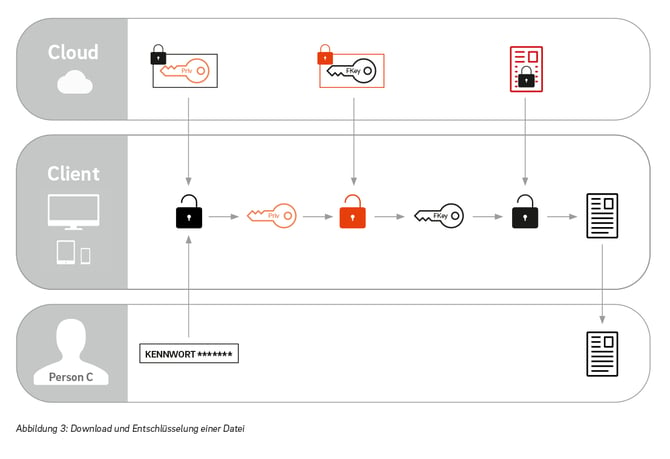 So the user first encrypts his files with his own key and transfers them to the server or the cloud. The key that encodes his data never leaves his client or computer in plain text.Therefore, there is no possibility to decrypt the files on the server itself. This means that no third party, not even the cloud operator, has access to the stored data.

Client-side encryption provides protection from inside intruders, cloud providers and criminals on the Internet

Since with client-side encryption, all files are already encrypted on the user's computer, the cloud provider and attackers who have gained access to the server system are denied the opportunity to access the files. This means that data cannot be handed over by the provider at the request of an authority.

Internal offenders can also be better prevented with client-side encryption, since with this variant no one except the sender and authorized recipients have access to the decrypted data. In this way, the circle of people who should have access to certain data can be minimized. Likewise, the administrator can also be deprived of access to sensitive data, such as wage costs.

This role is played by encryption in the context of GDPR

With the following five rules, you can easily assess for yourself whether a cloud encryption concept really offers you security:

A modern end-to-end encryption works platform-independent and cross-platform on all end devices. Being able to encrypt files easily should be a matter of course for you.

While client-side encryption was previously relatively difficult to implement and manage, it is now already integrated into modern solutions. This makes it particularly easy for you as a user to use, because you no longer have to deal with the installation of certificates or keys. With DRACOON, for example, you simply choose your personal decryption and encryption password - you start immediately and the encryption runs reliably in the background.

5 users and 10 GB - free forever.
Store and share your data in compliance with GDPR and for an unlimited period of time!